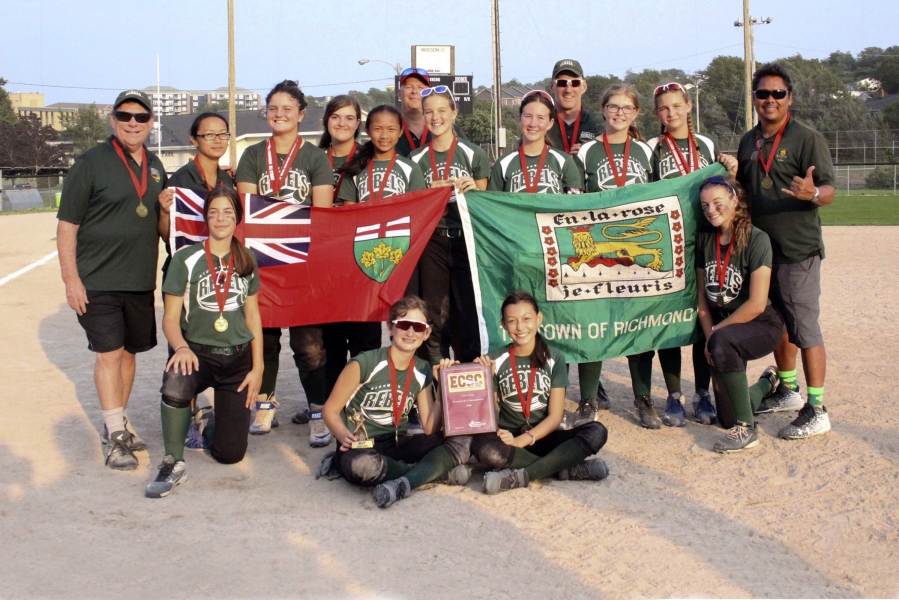 The Richmond Hill Rebels U14 Rep softball team climbed their way to the podium at the PWSA Provincial Championships, qualifying the team for the Eastern Canadian Championships in St. John’s, Newfoundland.

Representing Ontario at the Easterns, this team came out firing, mercying three teams and only dropping one game to PEI who they faced in the semi-finals the following day. With a changed in strategy and along with impressive pitching, strong bats and solid defence, the Rebels came out on top against PEI, winning 14-9.

In the championship game with Head Coach James Bland at the helm, Richmond Hill faced the Kitchener Klassics. The Klassics got off to an early lead with a score of 5-2 and the Rebels continued to trail by 3 runs through five innings. In the 6th inning, with a pitching change, the Rebels held their opponents, rallied at bat and scored 3 runs to tie the game.

In the top of the 7th, the Rebels shut down their opponents again and the home team had a chance to win the game in regulation innings. With one out and a runner on 2nd base, the clean up batter hit a rocket walk-off single to centre field, driving in the winning run. The Rebels came from behind to win the championship because they never stopped believing that they could.

This was a wonderful opportunity and experience for the team to be exposed to competitive softball from other provinces. The memories created will last a lifetime and will fuel the girls to continue playing softball for years to come. Congratulations to the Province of Ontario, the Town of Richmond Hill and the Richmond Hill Rebels, the 2018 Eastern Canadian Champions!